Online groceries are taking off in all major markets, except of Germany. Will software be able to eat groceries in Germany? 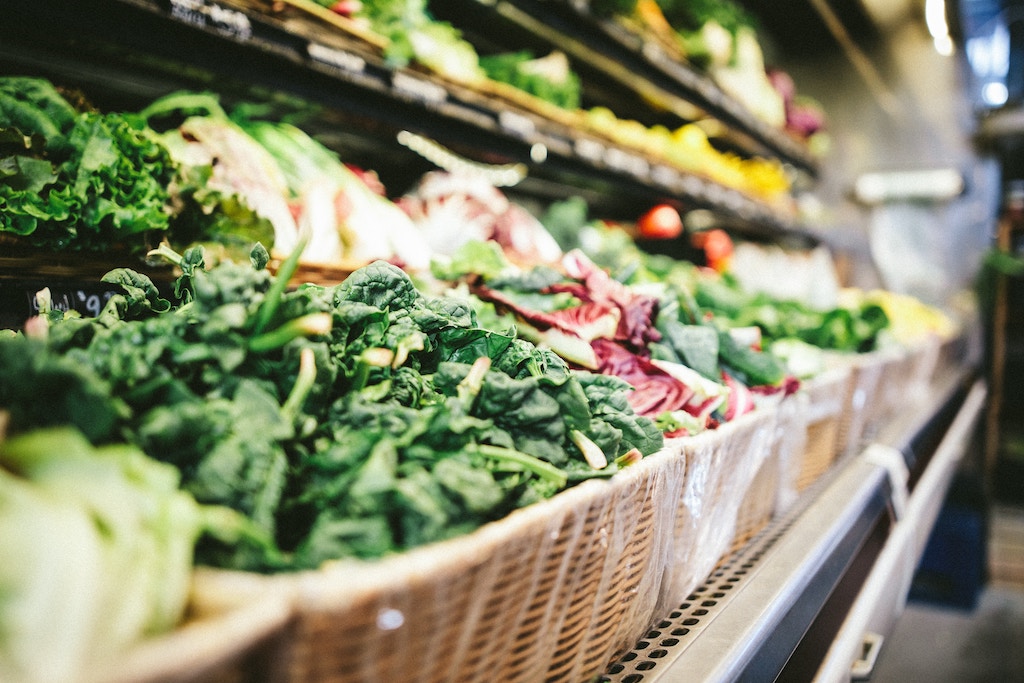 Like national tastes, the online grocery market differs vastly from country to country.

Whereas, in the UK, Switzerland and the US online grocers could establish themselves as viable alternatives, in Germany every move into online groceries so far has been unsuccessful.

In the UK, the pioneer was Ocado. They are still leading and have ambitious plans in the future. The incumbents, however, weren’t waiting too long to follow. All major UK chains including Tesco, Sainsbury, Waitrose, and Asda have established online delivery operations at this point in time.

Looking at the online presence of German heavyweights ALDI or LIDL is like Internet@2004. Only now Kaisers, an upscale grocer, has opened an online service in Berlin and Munich.

There are several factors making it difficult for online grocers in Germany. The first statistic that people discussing this topic generally mention is that Germans are famous for not spending much on food (only 11% of their income). While this is true the reasons are less on an attitude level than in the market structure. There are two main reasons for the relatively low spending levels: Competition and Discounter affinity. 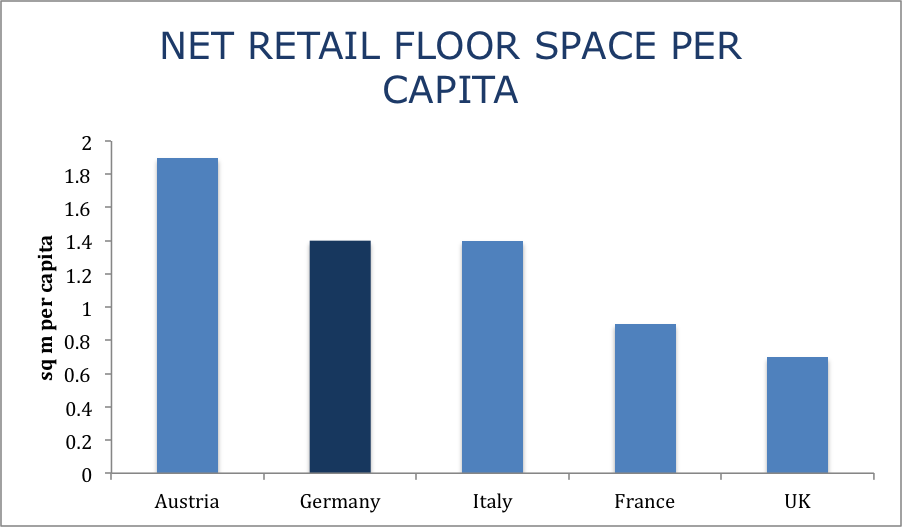 If we only look at the grocery retail space, we also find Germany on the top end: 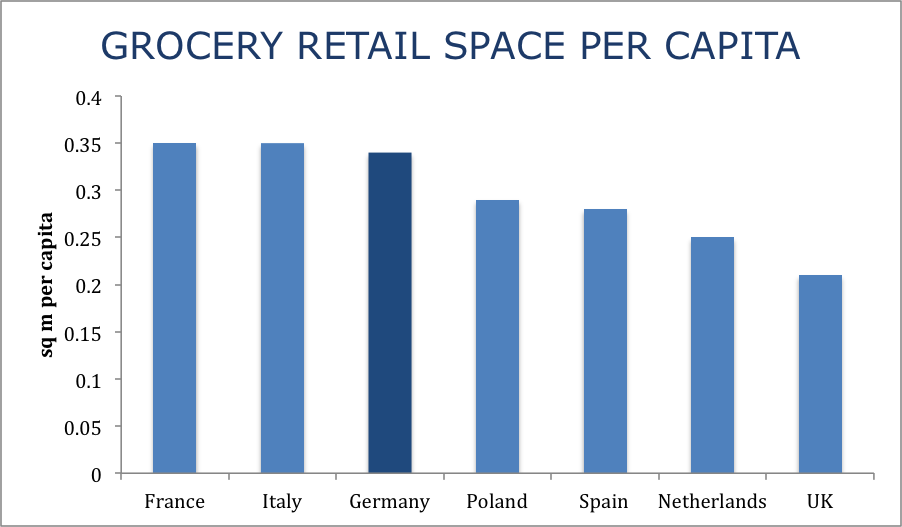 Grocers have built 0.34 sq m of space for every German. In comparison, in the UK this figure drops to 0.21.

This means that the grocery market in Germany is highly competitive. This is one reason why the price level for groceries is relatively low and under immense pressure.

As prices on food in Germany are under pressure they could not increase at the same speed as, wages or inflation (until 2007), and this is why the share of the disposable income spend on food is relatively low and has been gradually declining.

The second reason why Germans spend relatively little on food is ALDI.

ALDI pioneered the hard discount in Germany, selling a limited high-quality, white label assortment in its stores. However, the greatest achievement of ALDI was the establishment of a mainstream appeal.

Whereas, in other countries discount stores are often ridiculed and as being only for poor people, in Germany discounters now have a market share of over 40%.

In comparison, in France discounters have a market share of 13.6%.

What is interesting, though, is that due to the competition prices are low in the discounters and the regular groceries: A household basket consisting of 26 goods is only 5% cheaper at the discount chains.

In conclusion, Germany is a market with an established and convenient grocery infrastructure and fierce competition.

Therefore, establishing an online grocer in Germany requires significant investment. A strategy, which worked in the UK, such as the Tesco price match would be very costly in the beginning in Germany, but may work. However, as access to discounters is high and they are very established for food and non-food, an online grocer would have to provide more than just low prices.

Convenience models, such as subscriptions combined wit automatic learning of tastes and delivery offer great benefits in a society that is time pressured and growing old. Right now subscription models are a hot topic in the start-up community and potentially offer a great value proposition when it comes to food. With everybody and their dog on a diet plan and chronic disease prevalence growing giving customers the option to outsource the decision process of buying the “right” food that they will enjoy seems great. Moreover, good Subscription models would offer a sufficiently large CLV to eventually become profitable. Currently several new subscription models have launched including, Kochhaus and the very similar Hellofresh / Schlemmertüte

For consumers in Germany regional products are preferred to “bio” products as has been recently shown by a Nestle report. Services that offer regional products might have a competitive edge if they deliver on the quality and provide an emotional factor e.g. by addressing the romance associated with regional food and agriculture. Currently several services are offered, such as a general subscription model (http://www.oekokiste.de/) or one only for apples (http://www.abokiste-apfeltraum.de/).

As tackling the mainstream market requires significant investment, looking at niche markets shows some opportunities. Attractive niches in can be snacks or artisan foods. For both niches we find well-functioning concepts in the UK (graze) and US (foodzie). Although the German market is much smaller in snacks and artisan foods, both concepts are likely viable in Germany, albeit on a smaller scale.

Photo by Scott Warman on Unsplash