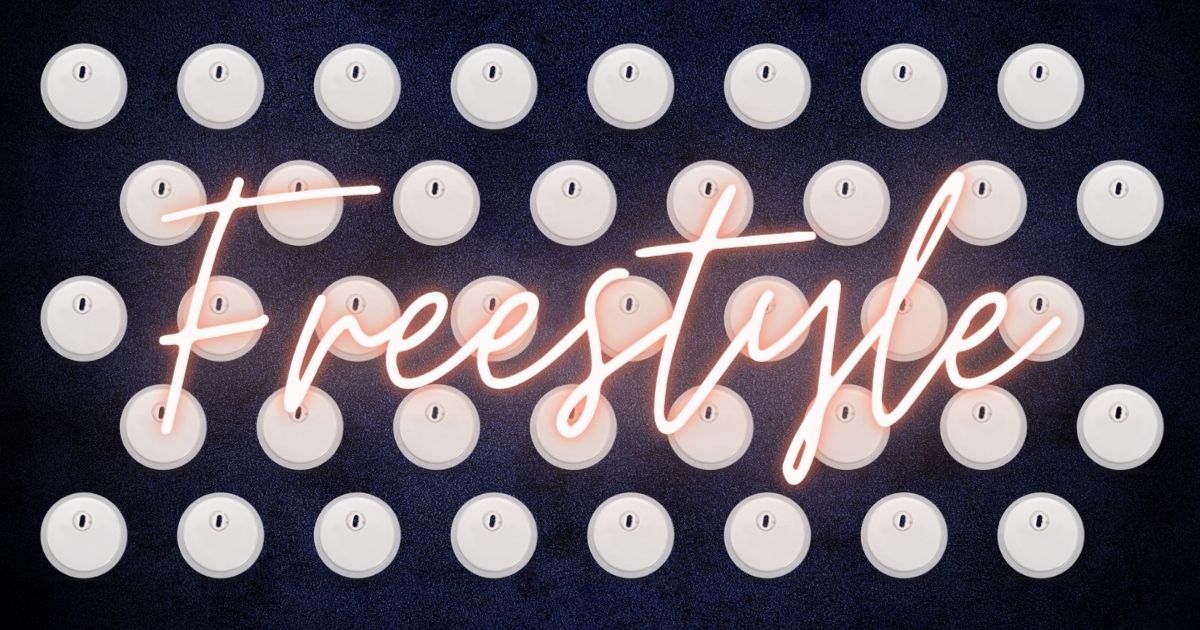 Last year, I’ve tried continuous glucose monitoring (CGM) for the first time. From Tim Ferris to Dr. Attia, measuring blood glucose is gaining more and more traction with healthy and health-conscious people. Since I’m building the future of healthcare myself, I had to experience CGM first-hand.

Apparently, Abbott, the company producing the Freestyle Libre 2 (the system I’ve tried in 2020), read my essay. They must have liked it because they were kind enough to provide me with a Freestyle Libre 3. It is the new version of the sensor, which just became available.

The third version is a significant step forward, both in terms of form and function. This quick evolution reminds me of the early days of the iPhone. Upgrading from iPhone 3 to iPhone 4 was a huge improvement. The fourth version was thinner, had a much better resolution, and was much faster.

How big is the step from Libre 2 to Freestyle Libre 3?

First of all, the unpacking experience stayed great. The black finish on the package looks very neat. The experience reminds me more and more of a high-end tech consumer product. It just works. 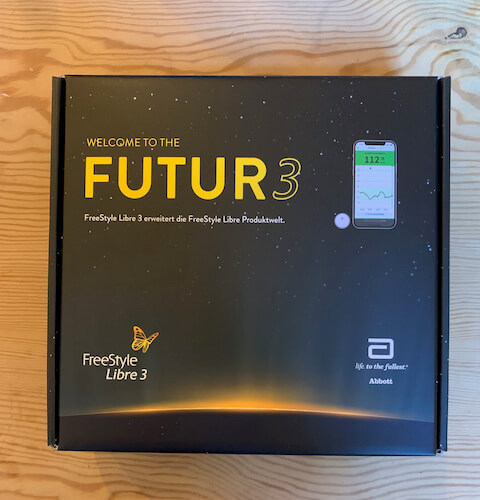 They’ve also made the package smaller. That’s nice, as the healthcare industry is producing a lot of waste. Obviously, the main reason, is that many things must only be used once.

While that’s good, they’ve decided to remove the alcohol wipe from the package. Maybe it’s just me, but I don’t have alcohol wipes at home. 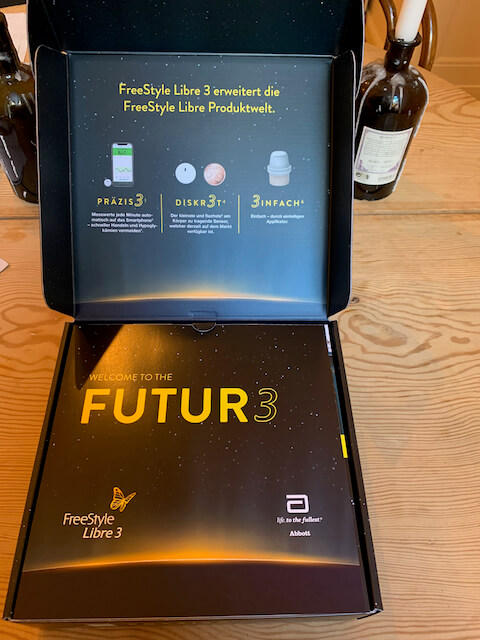 They’re required, though, to disinfect the area of the skin before application. So I had to improvise and use the disinfectant gel that all of us now keep, well, basically everywhere (thanks COVID).

After having successfully finished the cleaning step, it was time to apply the sensor. 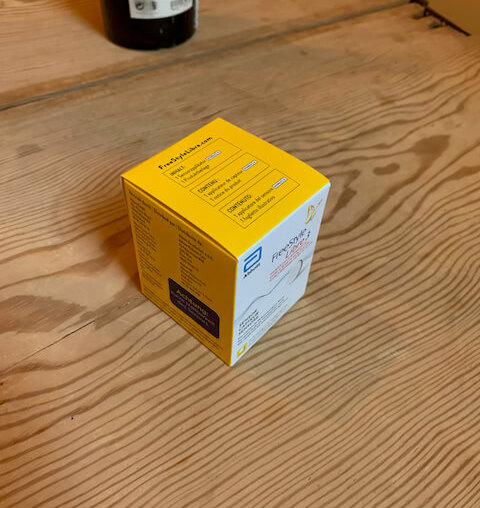 And here was the second surprise!

The applicator was already loaded with the sensor. That makes things easier compared to the previous version. It was a bit confusing the first time around, though, as I wasn’t quite sure what to do. 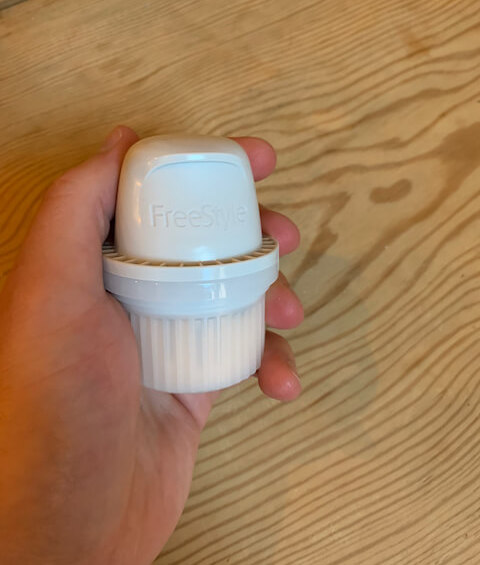 Rest assured, it is super easy!

All that was required was to open up the applicator and apply.

But another surprise was waiting for me.

When I opened up the applicator, I stared directly into the huge needle (which is the actual sensor)! Or, rather, it stared at me!

I’m not afraid of needles. But I’m not fond of them either.

What I liked about the previous application method, is that you don’t see the needle until you pull the sensor out of your arm. Here, the whole “magic” is revealed in advance.

Overall, I’m not so sure, if the application part got better or worse. At least for first-time and occasional users, I actually think it might have increased the barriers.

After the application, I had the sensor on the back of my arm.

I have to admit that the Libre 3 is glorious. 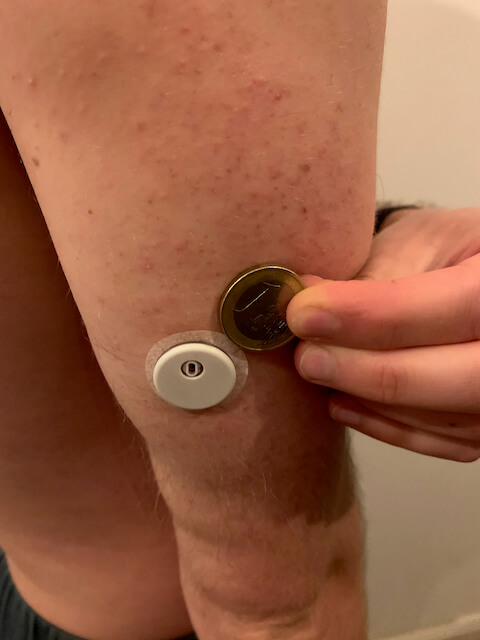 It is super thin. During the 2 weeks of wearing it, it didn’t get in the way of anything.

It really feels invisible. I literally caught myself checking several times whether or not it was still attached to my arm.

And that’s where magic only begins.

While the Libre 2 could be paired with an iPhone app, it was still required to get the phone close to the sensor in order to measure. The problem was that the sensor would only store data for around 8 hours. This meant that after a long walk or after waking up there would be data gaps. 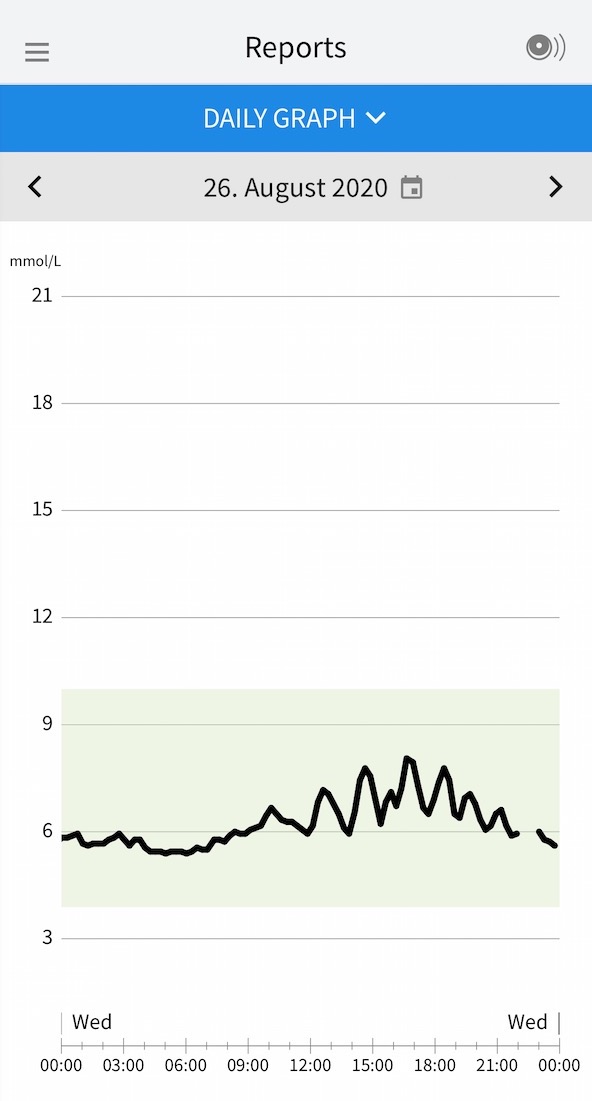 The new version continuously streams data to the app. And even if disconnected it can keep data for longer. Unfortunately, I couldn’t find out how many hours of data the third system can store. The end result: Zero data gaps! And that alone is already a large improvement.

To set up the new sensor, you need to download a new app. The app is a medical device itself. Since updating software medical devices is a huge pain, it is easier to just release a new version as a new medical device.

The new app version brought an important change. When registering it asks users for their permission to allow their personal information and sensor data to be used for research.

I think that’s great. More manufacturers need to ask users for their data. Only when users see this opt-in option in all digital health applications, they will get used to it and medical data will have the chance to become abundant enough to become useful.

After initially pairing the sensor with the app you don’t need to actively measure ever again. It just streams the data directly into the app as long as the sensor and the phone are in Bluetooth range.

What I didn’t like about the app is that it only shows the data graph. You can’t select a time in the past and get the specific reading for that time. You can only see the graph for a specific date.

Dexcom provides an official real-time API that provides access to CGM data. Unfortunately, Abbott does not.

It’s a missed opportunity. CGM can be a platform technology. After all, first companies, such as Levels are already building on top of it. So why make it difficult to get the data?

The use cases of this technology are quite wide-ranging from healthcare (diabetes, but potentially also e.g. cancer) to healthy people (e.g. diabetes prevention, sports and lifestyle improvements, personal nutrition guidance) to maybe even animal care.

It’s not realistic for one device-focused company to offer the best software for all use cases.

What did I learn this time?

I will share the four main lessons from my two weeks wearing the Freestyle Libre 3.

The first two days the sensor showed that I went into hypoglycemic territory at night. Hypoglycemia means that blood sugar drops too low.

With people suffering from diabetes nightly hypoglycemia is unfortunately common. It is a very dangerous condition and when arising often can lead to irreversible damage.

But why would I have it?

It just made no sense. I didn’t exhibit any symptoms related to it.

So I’ve conducted a small experiment by eating a portion of peanut butter before sleep. It’s a recommended solution to stabilize blood sugar at night. But it didn’t change anything.

Obviously, I got worried and conducted more research.

Then I’ve found an article on the Levels blog. It contained a link to an article describing the relationship between pressure applied to the sensor and low glucose readings. Apparently, when lying on the sensor it can lead to artificially low readings.

To try it out, I’ve changed my sleeping position. And indeed that was the fix.

My blood sugar is in the healthy range most of the time. So overall, sugar is not an issue. However, the overall, average or fasting levels don’t tell the whole story.

What seems to be important is the variance. Everything else equal, lower blood glucose variability seems to be better. There’s preliminary evidence that higher variability might be associated with worse outcomes. However, that research is quickly developing and it’s not clear whether variability is the cause or effect of poorer health.

What I’ve noticed (Attention! N equals 1 here.) is that on days with high variability I was tired and had slight headaches.

So for me personally, I feel like reducing variability is worth it.

Unsurprisingly, I’ve noticed that white rice really spikes my blood sugar. I will try to avoid it even more in the future.

Over the last year, I’ve become a fiber expert. We are developing a new solution for managing constipation with my new startup Apriwell. And fiber is a really important component. Fiber is also really underappreciated!

It is prebiotic and bulking. It has a significant effect on things ranging from digestion, food absorption to blood sugar regulation, immunity, and dopamine secretion via the microbiome. Most people eat only about half the fiber their body needs on a daily basis.

Because fiber gets digested slowly in the colon it “blocks” the digestion of other things. What this means in practice is that fiber smoothes out the blood sugar curve.

On days when I eat a fiber-rich breakfast (e.g. green smoothie or overnight oats) my blood sugar is much more stable throughout the day and as a response to eating lunch.